EXTREMELY DIFFICULT SHIPPING MARKET AT THE START OF 2nd QUARTER 2021

The shipping sector has never seen such problems with congestion, equipment shortages and rates increasing to unprecedented levels. And notwithstanding the higher rates, carriers are also restricting allocations and limiting container weights.

Seafreight rates are again increasing substantially in the second quarter of 2021 as the demand on most lanes remains very high and the bunker cost has increased.
During 2020 rates already increased every quarter. Analysis by Drewry shows that the increase in dry rates was much higher than for reefer rates, see below graph: 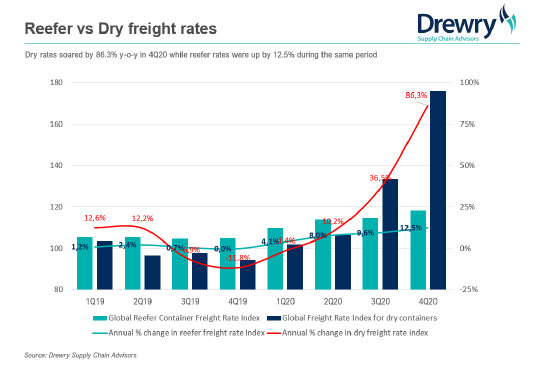 The boom in export of dry containers from China to Europe and China to the US are still the main drivers of high rates.

Referring to the import problems of US retailers, SeaIntelligence CEO Alan Murphy talking to The Loadstar, describes the ‘chicken-and-egg effect’ : “The current bottlenecks prevent importers from getting their cargo in time, causing some to try to front-load volumes, to secure timely delivery. This in turn intensifies demand pressures, making the bottlenecks worse – keeping the high pressure on freight rates.”

According to Jon Monroe Consulting “carriers are being more selective this year about who they sign with and at what terms. It is almost as if carriers are cherry-picking their customers.”
They refer to a lot of big companies now concluding their annual contract negotiations with shipping lines and finding out that they have little bargaining power in the current context.

At the inland side, container terminals in Europe are still struggling with yard congestion. To improve the situation, they’ve implemented various restrictions.
The most important measure is the limitation of the timeframe within which full containers can be delivered to the terminal (7 days prior to arrival of vessel in Antwerp, 3 days in Hamburg).

US & Canada
In an advisory to clients, shipping line Hapag Lloyd is indicating that “with the large number of congested ports and ships awaiting berths, please understand that the dates for arrivals / departures and cut-offs are constantly changing.”

The situation is really dramatic at the West Coast of the US, especially in the two biggest US ports of Los Angeles and Long Beach. For example in the second week of March more than 20 container vessels were awaiting berths, as all terminals continue to suffer from severe congestion. As a result also trucking is heavily delayed.

“The backups that started building up late last year have grown during a normally slack period in shipping demand, tying up inventories for weeks in some cases as ships wait to reach berths while offloaded containers sit for long periods at packed freight terminals”, writes the Wall Street Journal. “Delays that have stretched from docks to rail yards, truck terminals and distribution centers have rattled supply chains”.

At the East Coast, the port of Savannah is also facing problems with ships at anchor and a backlog due to weather conditions.
Although New York is not experiencing berth congestion, dwell times for import volumes continue to be higher than normally expected, according to Hapag Lloyd. Gate turn times for truckers are above normal for all terminals and depots.

Our agent informed us that trucking rates will increase in Q2, in line with the current market situation. “The trucking industry has backed up due to unexpected volume of business hit in a short period time, shortage of equipment, shortage of drivers, terminals are messed up etc . Truckers are asking a huge hike on rates to cover the loads, so we have no other choice to go with ….”.

In Canada the “situation especially at the Toronto rail yard is very critical at the moment”, says CMA CGM. Toronto is heavily congested wherefore the rail operators’ capacities for moving containers from the port of Montreal to Toronto ramp is decreasing day by day.

The port of Montreal is facing possible new actions from unionized dockworkers, as they did reject an offer from management on Sunday. This marks the end of a seven-month truce agreed to by the two sides which gave a reprieve to shippers who were hit hard last summer by the strike.

China
At the other side of the ocean, the figures released by the China Ports and Harbors Association show a huge recovery, underscoring the bounce back in both production and demand for exports in China. The container volume at eight major Chinese ports increased 73% in early February and 48% in mid-February. The growth rate of Shenzhen port exceeded 100% while the port of Shanghai posted nearly 90% growth rate on container volume. These container volumes are in sharp contrast with the same period last year, when China choose for an extended shutdown following the Lunar New Year.

“China’s resilient export sector was a key pillar of the overall recovery in the world’s second largest economy, which expanded 2.3% last year, making it the only major economy to post growth in 2020. The trade figures reflect resilient overseas demand as fiscal stimulus measures in the U.S. and Europe boosted spending”, according to the Wall Street Journal. “On the supply side, meantime, official pandemic-control measures encouraging Chinese workers to stay at their workplaces rather than return home for the Lunar New Year meant that exporters were able to better meet demand than in years past, China’s customs bureau said Sunday.”