The market situation remains very challenging for those companies involved in international trade. Persistent congestion at many ports worldwide in combination with difficulties to secure inland haulage make the supply chain unreliable.

Seaport congestion is growing across multiple continents, according to Clarkson’s containership port congestion index. Congestion at the terminals on the US east coast has risen to near record levels, but also at Chinese mainports such as Ningbo, Shenzhen and Hong Kong terminals remain under pressure, this due to covid measures and the typhoon season.

In Europe, strikes in several countries, growing covid cases, and a lot of import vessels coming from Asia have contributed to more congestion at big ports as Antwerp, Hamburg, Le Havre and Rotterdam. A wage dispute was the cause of a strike last month in Germany, and now also dockers started an eight-day strike in the port of Felixstowe.

Data from the Port of Rotterdam shows a substantial increase of the dwell time for containers at its deepsea container terminals: from 4 days pre-pandemic to 10 days. Those containers staying longer take up capacity and contribute to severe congestion.
“In the US, a shortage of rail capacity and warehouse space means that boxes remain in ports for too long”, dixit the newspaper WSJ.

Statistics from Sea-Intelligence about the global fleet unavailable due to supply chain delays, show a little bit of improvement versus the beginning of 2022, but still 10% of the containership capacity worldwide is ‘lost’ due to all current problems.

For importers and exporters worldwide, the schedule reliability of the shipping lines remains an important KPI.

In her monthly ‘Global Liner Performance’ (GLP) report Sea-Intelligence shows that schedule reliability improved a little bit – for the first time since the start of the pandemic – to 40% in June 2022, but remains nevertheless a big problem. 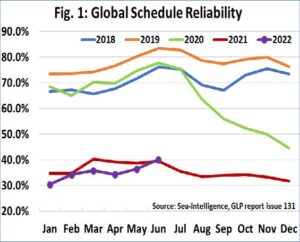 The ‘EU Mobility Package’ in place since February has – as expected – had a significant impact on the availability of truckers, which was already critical. And there’s also the impact of the war: only a fraction of the truck drivers from Russia and Ukraine were replaced by other nationalities. In addition, the current drought and low water on the European waterways has caused an extra demand for truck capacity. All this combined with the annual exodus during the summer vacations means that the shortage of truck drivers has reached a new peak.

The lack of drivers in combination with increased costs and diesel means that transport prices continue to rise. Expectations are that the difficult situation would continue for at least a few more months. An early possible cooling of the economy could have a 'positive' impact in this case as the supply/demand situation is completely skewed for now.