After The Netherlands, Belgium also rapidly expands its Weigh in Motion (WIM) systems over the Belgian road network. With the strengthening weight restrictions for loads from France, it only becomes a matter of time before increased checks are also carried out there. With the Weigh In Motion system, governments want to install a system that makes it possible to automatically preselect potentially overloaded vehicles. We would like to remind you that, legally the loading location is jointly responsible to monitor a spread of the weight distribution over the entire loading floor and to respect the maximum load capacity.

How does it work?
All vehicles are being weighed while passing a certain point, by using:
– Cameras on both sides of the road, mounted on a bridge: they take an overview of the situation. Number plate recognition cameras mounted above each lane on a bridge: these automatically record the number plate of each passing vehicle
– Inductive loops in the road surface: in each lane, including the emergency lane: detection of the vehicles, determination of the length of the vehicle, determination of the speed of the vehicle (indication)
– Weighing sensors in the road surface: in the right and centre lane: detection of the axles, registration of the axle loads.The weighing sensors are piezo quartz sensors. This material has the property of converting the force applied vertically to the material into a tension whose size is proportional to the force applied. By combining the information obtained from the inductive loops and the weighing sensors, it is possible to classify each detected vehicle into a certain vehicle class and determine whether or not it is in an overloaded condition. 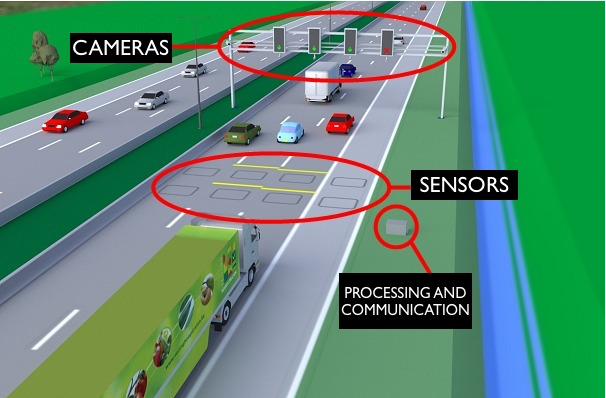 “The loading location is jointly responsible to monitor a spread of the weight distribution and to respect the maximum load capacity.”

The members of the road police and the roadside inspection can continuously consult the data transmitted by the SMO system via a graphical user interface. This gives them a continuous overview of all vehicles transhipped according to the SMO system that are heading in the right direction. They can then, with greater efficiency, derive potentially overloaded vehicles to a fixed axle weighing installation.

Functioning of the system

At WIM, number plate recognition cameras are attached to a portico or bridge (above each lane). They automatically record the registration plate of each vehicle. Loops in the road surface detect passing vehicles and determine their length. Weighing sensors in the road surface detect the axles and register the axle loads. Cameras on either side of the road provide an overview of the situation. By combining the information from the inductive loops and the weighing sensors, it is possible to classify each detected vehicle into a certain vehicle class and to check whether or not it is in an overloaded condition. People from the road police or road inspection who are located further down the road can continuously consult the data from the WIM system. In this way they get an overview of all possible overloaded trucks coming from their direction. The SMO system enables them to remove potential offenders from traffic with much greater efficiency and bring them to a fixed weighing installation to determine the exact (over)weight.

The information from all equipment on the roadside is sent via the Flemish government’s telematic network to a central server. The Network and Telematics section has adapted and expanded the existing network for this purpose. The members of the road police and road inspection can continuously consult the measurement data on a computer via a graphical user interface.

The WIM systems have been installed at 10 locations in Flanders. By using these radars as a pre-selection system, the efficiency of interception was increased to 83% instead of the usual 15 to 20% when interceptions are done on a visual basis.

As a result of the recent inspections by the Flemish road inspectors and the Federal road police on compliance with the axle loads decree (Decree 3 May 2013 on the protection of the traffic infrastructure in the case of special road transport, BS 13 June 2014, 2013/35499), the debate on the responsibility for the correct loading of lorries has flared up again. After all, where before the Decree was amended, the intention of the principal or shipper still had to be proven in order to establish the liability on his part, the legislator has established the following when amending the text in Article 14, paragraph 2:  “the principal and the shipper shall be punished, in accordance with the penalty provisions referred to in §§ 1 and 2, if they have given instructions or taken acts that have led to an infringement of this Decree or its implementing decrees”. We’ve seen an increased amount of penalties by the police during the last months, resulting in a fine of a few thousand euros for every infringement. Moreover, the driver can lose his/her driving license & the trucking company risks to lose their trucking license.